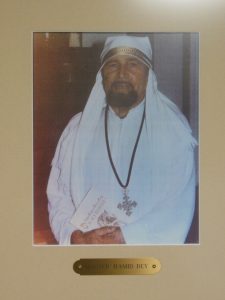 When Hamid Bey was a small boy, he had a remarkable experience. He and his parents met with a scholar who felt he was a candidate for Coptic Temple training. His parents agreed.

In Coptic temple training, Hamid was taught spiritual disciplines in emotional and mental control and meditation. One lesson involved going out in the countryside to beg for food for the temple. His Master had told him to thank the people, whether they gave him anything or not. This task made a great impression on him.

As Hamid grew in years, so did the advanced pace of his training. He was taught to enter a state of suspended animation. This was achieved by placing his body at the complete command of his will.

There were six preparatory Temples of learning that Hamid passed through before he could enter the final temple, the Temple of Divine Wisdom. In order to get to this temple, it is necessary to swim the Nile and enter through a tunnel. The big test here is that the Nile is infested in this area with vast numbers of crocodiles. The only way to know whether crocodiles are in the murky water is to locate them by mind power. This is something Hamid and his classmates were taught in their previous years of intensive training.

In this last temple, Hamid passed through the greatest and final test. Here, a flower is cultivated which does not grow anywhere in the world except in deepest central Africa. It is a beautiful white flower that gradually opens and closes. When open, the perfume of the flower is very pleasant; but, is a deadly poison to humans. It is used to prove an initiate’s physical and mental control. The flower is placed in the center of a series of eleven concentric circles. The eleventh one is closest to the flower. The initiate begins with the outermost circle. He must sit for one hour in each circle and keep his body independent of the poison, beginning with the outermost circle. The initiate earns a ring for each circle mastered; moving him closer to the flower. Hamid Bey made it to the seventh circle, which made him a seven-ring Master. The rings were symbolically worn on his headdress. When he attained the seventh degree, Hamid felt that he should leave the temple and go out into the world.

Upon his graduation from training, Hamid was given the privilege of a personal meeting with the great Master of the temple. The hour he spent with him gave Hamid guiding inspiration throughout his life.

At the age of eighteen, Hamid returned home to his family in Cairo. He soon joined the armed forces that were being sent out from Egypt to do service in World War I. He spent the next few years in the air force. There was one occasion during the war when his ability to place himself into trance saved his life. He found himself behind the lines with the enemy fast upon him. He put himself into trance and the enemy soldiers completely ignored him, being certain that he was already dead.

After W.W.I., Hamid decided to go to Italy to publicly demonstrate the powers he had learned in the temple training. He wanted to convince a skeptical world that there is much more to a man than the outer form. His intention was to place himself in a state of suspended animation and be buried alive six feet underground for three days.

In 1927, the magician Houdini, was attracting worldwide attention and announced that he could duplicate, by mechanical means, any so-called spiritual phenomenon ever produced. Hamid Bey was sent to the United States at this time to challenge Houdini. Three weeks after Hamid arrived, Houdini died. Hamid, then not knowing any English or any of the customs, signed up as a vaudeville act under a binding two-year contract. He spent the next two years, much to his disdain, doing his “act” on stage three times a day for sometimes heckling audiences. After that experience, he became great friends with Paramhansa Yogananda and traveled with him doing shows and lectures together.

To maintain his temple rank of seven-ring Master, Hamid had to return to Egypt every seven years. He was required to go through additional tests and examinations by his Master. In 1936 when Hamid returned to Egypt, he had a great spiritual experience. He was taken astrally by his Master to the secret Archive Chamber of the Great Pyramid. It was at this time his true mission was revealed. He was to go to the United States, which was to become the new Holy Land, to establish the Coptic Order. In 1937, Master Hamid Bey founded the Coptic Fellowship in Los Angeles, California.

In the following years Hamid dedicated his life to teaching the Universal Principles of right living throughout the United States. Helping him was a pure, humble man from Switzerland, Master Stanley. Only a few details are known of Master Stanley’s background because he would seldom speak of himself or his past

As a young boy in Switzerland, Master Stanley had a spiritual experience that led him to become a teacher of Truth. One hot day he rode his bicycle up a very steep hill. When he reached the top, he was totally exhausted. He went into a state of suspended consciousness. In his words, “the Christ” came to him and spoke. This experience served as a guiding inspiration all his life. Master Stanley often spoke of the Christ’s message of Love, which he wanted to get to as many people as possible.

Master Stanley first was introduced to the Coptic Philosophy when he attended a lecture by Hamid Bey in Detroit, Michigan. A deep spiritual bond was immediately recognized between them. He was ordained by Master Hamid Bey. Master Stanley set about helping to spread the Coptic Teachings throughout the Midwest. He founded the Detroit Coptic Temple, established and taught at centers in Milwaukee, Toledo and Chicago, and went on to open ten more centers throughout the Midwest.

In the next twenty-three years, Hamid Bey, aided by Master Stanley, continued to teach and establish Coptic Centers in the United States. Master Stanley reached the point of transition from his life in 1972.

John Davis, an honorable and humble man from Michigan, was ordained as a Coptic Minister by Master Stanley in 1969. After Master Stanley’s passing, John Davis became the Midwest Coptic director. In 1974, the Coptic Fellowship held their first National Convention in Kalamazoo, Michigan.

On July 16, 1976, Hamid Bey left his physical body. This happened for two reasons: first, he realized that people were not concentrating on learning the truth for themselves; and secondly, they were concentrating on his dynamic personality. He passed over in a hospital in Los Angeles from what doctors called cardiac arrest. Hamid simply stopped his heart from beating.

Before his transition, Hamid Bey chose John Davis to take over as National Director. According to his wishes, Hamid’s body was cremated, and his ashes were scattered over the Pacific Ocean.

Today, Coptics are continually growing. We no longer stand on the threshold of the New Age; we have proven ourselves and have stepped through it. The present Coptic Fellowship still follow the teachings of Hamid Bey and are universal in purpose.

Help us spread the word about this.